Camping at Rishikesh (1) – Trek and Treat 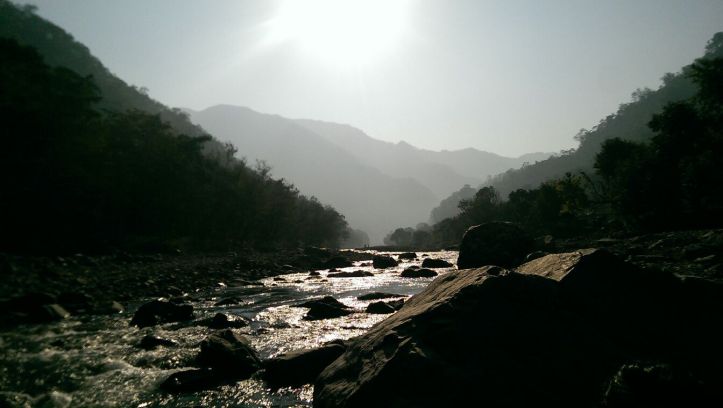 At the break of dawn, in the month of November, we arrive at Haridwaar. As soon as we get off the train, the cool air starts casting its spell on us. With trembling hands, we rush to save ourselves from the clutches of cold and pull out our sweaters from our luggage. Okay, I may be exaggerating but when you are accustomed to live in scorching heat of 32 degree Celsius, even 10 degree can make you freeze.

We had booked a camp at Rishikesh for 2 days. Rishikesh is a small old town in the northern state of Uttarakhand in India. It’s situated on the banks of the Ganges River, surrounded by hills on three sides. The enchanting scenery along with pleasant weather makes Rishikesh an ideal spot for camping. People usually flock here in search of peace or adventure.

This town is divine and daring with its scenic backdrop, the chants of Hindu prayers and the adrenaline-pumping adventures that it offers. No wonder Rishikesh has many names- Land of God, The Adventure Capital of India and The Yoga Capital of the world.

Though Indians have been drawn to Rishikesh since ancient times, it gained prominence in the west when the Beatles came here many years ago.

Our camp organizer had arranged a cab for us. The ride from Haridwaar to Rishikesh was truly exhilarating. At 6.am, the roads were deserted with only few people on the streets. While driving, we saw huge Shiva statue, some ashrams, temples and colorful posters of the adventure sports. After almost and hour, we halted at a small tea stall to have some nice warm Masala Tea and cauliflower bhajjis (little nuggets of cauliflower dipped in gram flour and deep fried) served piping hot with mint chutney. Being a religious place, you will rarely find non veg food here. In fact in most places use of garlic and onions in food is also prohibited.

As we moved from Haridwar to Rishikesh, the shift in the scenery became prominent. On the long and winding road, our car passed through majestic mountains, freshwater rivers and picturesque valleys blooming with beautiful flora and fauna.

The driver dropped us atop a hill. Down the hill we could see our camp with their hoarding. We were at first bemused and thought our driver was kidding. This slope was steep and there was no way we could climb down and reach that camp in single piece. But the reality of the grim situation set in when we called the camp owner and confirmed the location. Apparently going through these perilous hills was the only way to reach the destination. So we prayed the Lords and started descending with labor and luggage.

I made the classic mistake of carrying an extravagant amount of clothes in a trolley luggage bag instead of the rucksack which is obviously a better and a smarter choice. We relived the poem Jack and Jill as me and my friends struggled to climb down, toiling and tumbling all the way down.

Finally we reached the site, bruised and bone tired. But soon our exhaustion was replaced by exaltation as we behold the beauty of the site. It was a sensual treat. The lush green trees, spotted grey mountains and gushing sound of river against the stones, the time stood still. So did us. We just sat there for an hour, in peace & quiet. Just absorbing the calmness and soaking in the sun.

It felt like a natural therapy, listening to the chirping of birds and glistening in the sunshine, enjoying the sound and sight of nature. 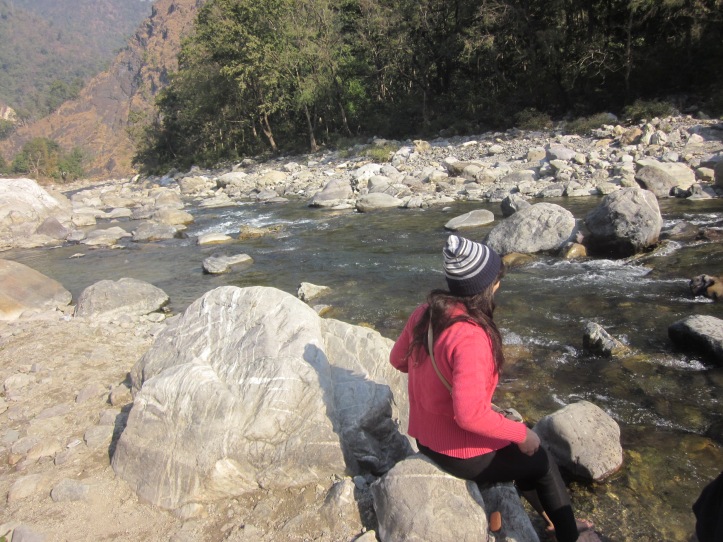 Our camp was located right in front of mountains and river stream. There were 8 tents, one common room, eight bathrooms (detached), one kitchen and a huge ground to play basketball, volleyball and badminton.

The hunger pangs & the gong of bell there made us spring and go to the common area where the lunch was being served. The food was simple yet delicious, with typical Indian dal chawal sabzi roti and gulab jamun. Cold days and hot food is best combination to brighten the mood.

After indulging in delicious desi meal and interacting with other members of the camp, we embarked on our waterfall trek at 4 pm. We were accompanied by two guide, two dogs and twenty other people. It was my first & only trekking experience so far. The narrow stream of water in the jungle was our trail which will lead us to our waterfall. I was wearing 3 layers of clothes (it was freaking 7 degree Celsius) and as the trek went on, a layer of clothing went off, till I was in my tee in tracks. The air was thin and my face was redder than the Little Red Riding Hood. 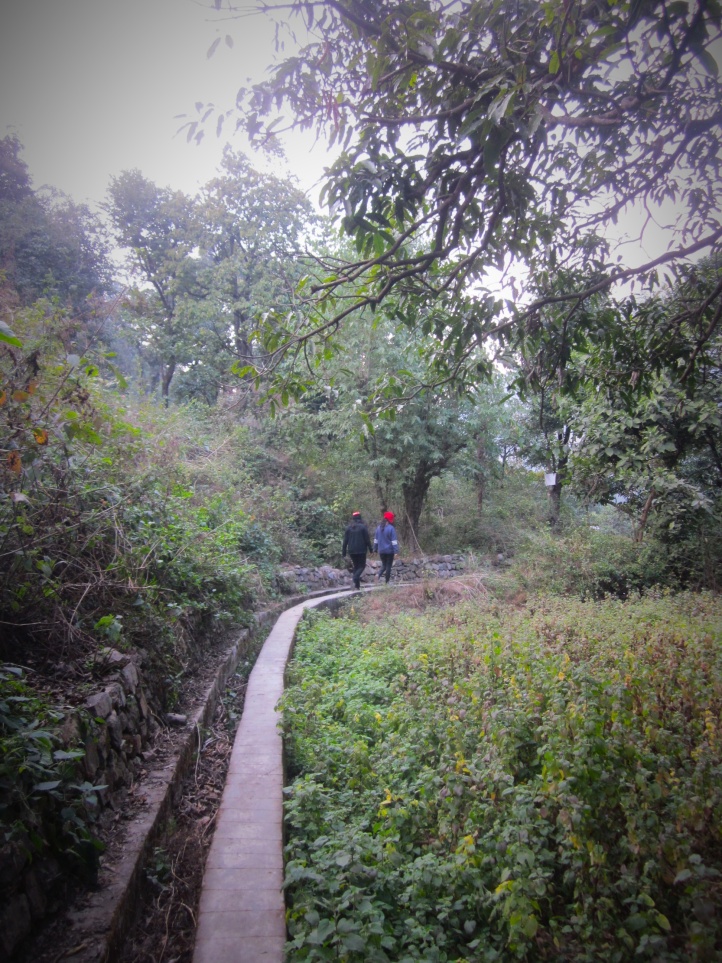 After two hours and truckloads of sweat, we reached our destination. And the exertion was worth it.  Look at this waterfall below. Isn’t this wonderful?

The shape of the waterfall looked like hundreds of little grass umbrellas are attached to the mountains. Nature never stops surprising! 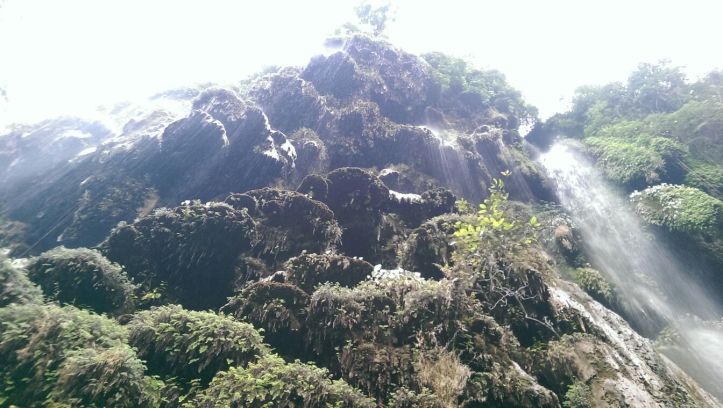 Now, if climbing up was difficult, climbing down was a disaster. We were the slowest in bunch of 20 people; our tour guide had abandoned us totally forgetting that we were part of the group. Four of us in the middle of the jungle stranded alone. We were scared and had to get out of there before the dark night sets in.

Luckily for us, the two dogs were blessing in disguise. They never left our side. The waited for us, one leading us and one following us, loyally helping us get out of there. I felt immense love and gratitude for them.

It was heartwarming to see such loyalty and love by these furry animals. I was never a pet person but this incidence changed my minds for dog. It was the first time I petted a dog. Unfortunately one of my friends is really scared of dog, and she was terrified the whole time. At one point she was so scared that she just broke down. And we tried to shoo away the dogs for her peace but they would not leave us alone. 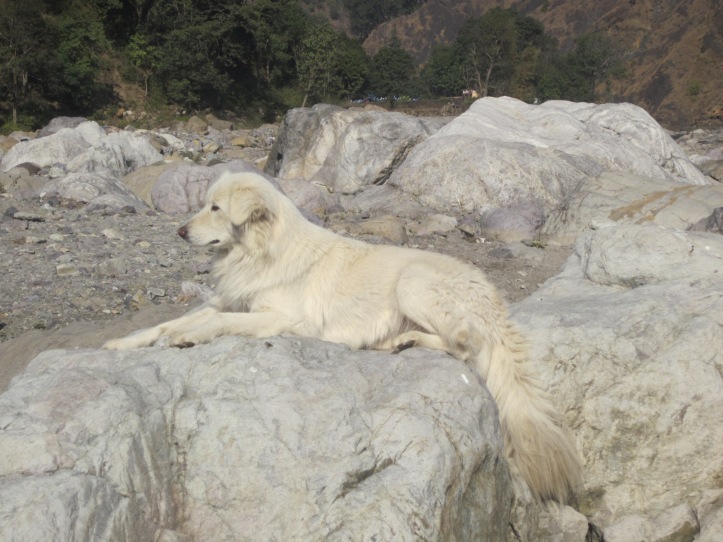 Somehow we managed to reach camp with sweat tears & torch. So pissed with the tour guide; we blasted at him for the lack of care and responsibility. He apologized and tried to pacify us.

Later at night, the camp had arranged for a bonfire. I had always seen friends chilling at bonfire in movies and now it was my time to actually experience it. Sitting besides the river, under the twinkling stars, accompanied by the bonfire and bunch of friends. It all seems magical. But our dreams were shattered thanks to some drunken moron guys who started behaving weird out there. They constantly tried to hit on us making us uncomfortable, and played loud brash music. Long story short, it did not feel good. To spare ourselves from eve teasing and eve ruining, we furiously locked up ourselves in tent. We were sulking and bitching that nothing is going right today. Soon the bitchiness, turned into craziness as we started partying and dancing inside the tent, with our phone flashlights.

That’s the beauty of friends. Even lockup can be fun with them. 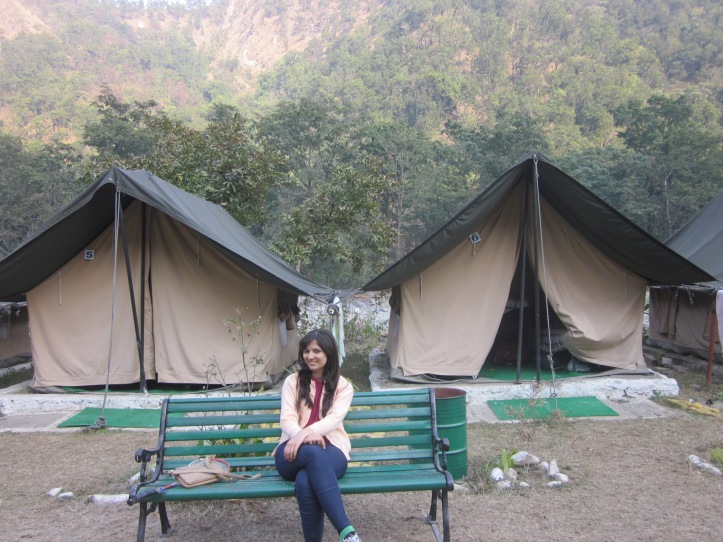 That was my day one at Rishikesh. For day 2 of Camping at Rishikesh – Rafting and Rock Climbing was on the agenda.

Have you guys tried rafting or rock climbing? How was your experience? Let me know in the comments below

via Camping at Rishikesh (1) – Trek and Treat